Sammy goes to the dentist 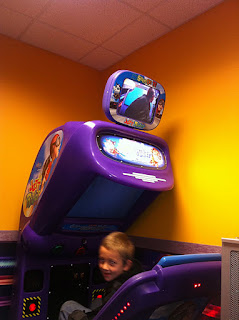 Sammy in the waiting area at his dentist. This is a little ride. He lays on the chair and watches the screen which shows one of three roller coaster rides. As he watches the chair moves to simulate the movement of the ride. 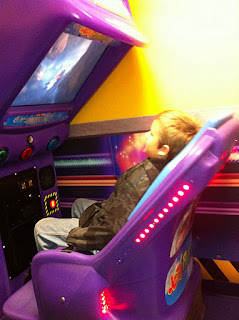 Yup he is having fun

Ok so anyone who knows me well. Knows I have issues with dentists. My dentist also knows this and thank goodness does not take it personally. Well I have been very careful not to take my kids with me when I go because i don't want them to have my issues/ fears of them. Well that being said i guess 1 out of my 4 had to end up with some sort of issues anyway. The three older kids have the attitude of lets get this done. Not really any problems with the dentist just no great love for them but they don't moan and groan about going. Sammy on the other hand was freaking out before he even got in the chair. He had a toothache so we went to go get it fixed and wasn't happy with that idea either. I guess I shouldn't have been surprised when he wasn't overly happy to go get his teeth cleaned that getting a tooth ache was going to be a problem for him.
When the dentist just wanted to look in Sammy's mouth Sammy didn't want to open up but did so very reluctantly and not very big at all. When the dentist pulled out the needle to numb his gums Sammy clamped his mouth so tightly shut nothing was going in there. We called Ken to see if he could come and convince him to open his mouth. Nope that wasn't going to work either. That boy decided having a toothache was better then having it taken care of. Silly boy. So
Dr. Boatman referred him to a pediatric dentist in hopes he would have better luck with Sammy because as he pointed out, while he was looking at me, that it only takes one bad experience to scar him for life as far as dentists go. So to the pediatric dentist Ken took Sammy . Now this dentist Sammy didn't have a problem with. When Ken took Him Sammy cooperated and allowed the dentist to fix his tooth. So when I went back at the beginning of this month I could see why Sammy was content here.
In the waiting room it is like a miniature arcade for the kids. In the exam rooms the walls are painted in fun space or other fun scenes. On the ceiling there is a tv for the kids to watch while the dentist is doing his thing. They put earphones on him so he can't hear what is being said and sunglasses on him as well. But they don't use the scary language either that you hear in most dentist like cavity, drill, crown and other things. They use words like sugar bugs and in Sammy's case a silver hat and magic air. Yup he had to use nitrous oxide to help with getting his teeth fixed. Sammy sat there had his mouth opened and fully cooperated.When he was done he was given a token to get a prize out of one of 4-5 big gumball machines that had bouncy balls and other little toys. While i couldn't really watch what was going on and the smells were enough to drive me crazy I was happy Sammy came out smiling. And All I could think of was too bad they don't have something like this I could go to(lol) or at least could have gone to when I was a child because then maybe I wouldn't have my issues. Hopefully Sammy will grow out of his issues so he won't always need the "magic air" but right now I am glad we found a way to get his mouth taken care of.
Posted by Freyja Colborn at 9:26 PM