Nelson goes back to school 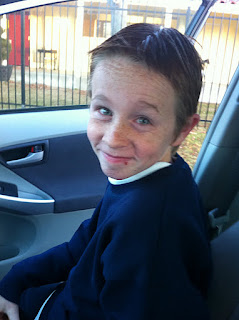 Nelson on his first morning back. In his uniform isn't he handsome.


So how did we start the new year. on the 3rd I went to Paragon Collegiate Academy and got Nelson signed up for school. The homeschooling thing is so not working with me working so it is time for him to go back. and with this school there is smaller class sizes and I felt this would be much more beneficial for him then sending him to a class that has 30+ kids in it. I was given a list of things we need to get for him. Can i just say it was uber weird going "back to school" shopping in January. We needed to get everything from backpack to lunch box to pencils and all other school supplies. As well as clothes. however that was nice because he has to wear a uniform so it was just certain things he needed. It was very strange but good.
On the 4th was his first day back at public school in two and a half years. To say the least I was nervous about doing this. I so don't want him to back slide into old habits. However He was very excited about this. And Very much wanting to go back to school.I am sure it helped him adjust easier when he found out the a couple of the kids from his former class at Kynoch are now in his class of 16. Yup there are 16 6th graders in the whole school.And so far I would have to say i am right. He seems to be doing well in this school. And he seems to be happy to be back around people again. So here we are at new beginnings again and hoping for the best. Good Luck Nelson i know you can do it.
Posted by Freyja Colborn at 5:23 PM