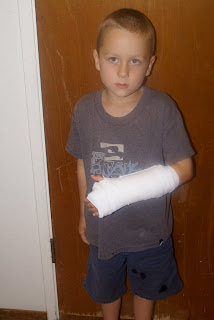 The night he fractured his wrist. 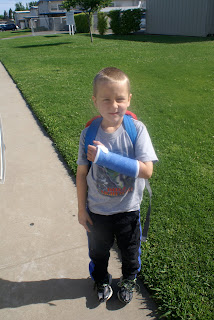 Three days later when he finally got his real cast.

Yup this is how we started our month of May. On May 2nd Sammy went to follow Ken out to the backyard to the bbq. They went to go down a step Sammy has gone down hundreds of times without thinking twice about but on this night he decided to miss it. He bruised his knee pretty good and he fractured his wrist.
So why did it take 3 days to get his real cast? Well because when we went to urgent care the stupid doctor told me that someone from orthepedics would call me to set up an appointment to have him come in and get it. Well when tuesday had come and still know one had called and I caught my resourceful 5 yr old trying to cut off the splint I called the doctor. I was then told that I should have been able to take him in when ever. RGGG :( Needless to say I was just slightly( I say sarcastically) irritated. But because the office was closed I had to wait one more night. I was able to get him in first thing.
So now he has a cast for the next three weeks. Thanks goodness it isn't a bad fracture. In fact we were told that if he had to get one this was the one to get. We got to see the x-rays and barely saw anything.
Hopefully this isn't a sign for the rest of the month.
Posted by Freyja Colborn at 4:50 PM

Same thing happened to me in 6th grade. I went to the ER after driving home from Monterrey with a fractured arm and they put a temporary on for a few days. It is just how it works I guess.