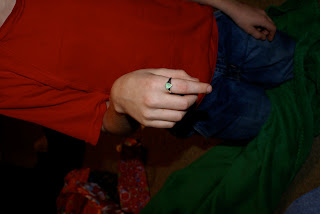 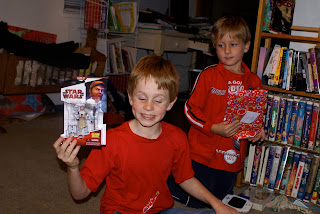 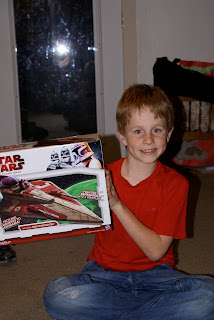 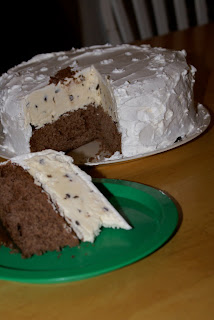 The ice cream cake I made for his birthday. 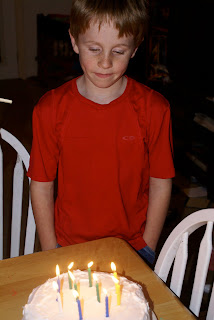 Yesterday was a good day for Nelson. He celebrated his 10th birthday. I can't believe he is 10 already. Time just totally flies by. It is so weird to think I have 2 kids in their double digits.

Boy was he excited. We didn't do anything to exciting just a small family evening at home. He wanted pineapple pizza for his birthday dinner. So we got that and a pepperoni for those who don't like pineapple. He also wanted an ice cream cake so I made him one. Let me just say it is a lot cheaper to do it that way then going to baskin robbins or somewhere else. He has been asking for a real CTR ring for a while so we got him one this year. He is very excited because it glows in the dark. He is also very into Star Wars the clone wars so we got him a couple of little toys from that. He was very pleased with his birthday. Later this month he wants to go see "How to train my dragon" with a friend or two. Like Kenzie went to a movie for her birthday.

Happy Birthday Nelson!!!
Posted by Freyja Colborn at 9:08 AM

Happy Birthday Nelson. I hope you had an amazing day.

I just want to tell you-I would never want to run against you as mother of the year!! You are such an amazing mother and wife and I can tell you guys are such amazing parents. Your kids always look so happy!! Oh, and I wish I could have some of that ice cream cake!!