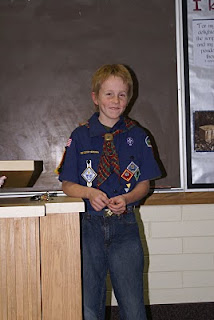 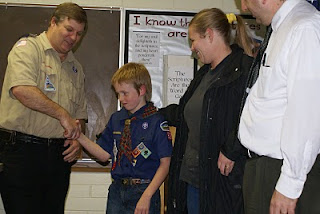 Nelson Getting his award. 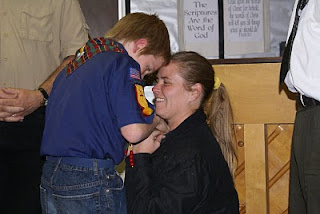 Me receiving my mother's pin from Nelson. For anyone who doesn't know the mother gets a pin as well the boy/ young man since we are the pushing force behind them.

Well January was a crazy month but a highly successful one. One of the successes that month was Nelson finally finishing all he needed to so he could get his Weblos badge in cub scouts. And by time the pack meeting came around at the end of January he was well on his way to completing the Arrow of Light. He was one very excited little boy and very excited that he was so close to getting his Arrow as well. For the Next month all I heard was "I'm getting the arrow of light, I'm getting the arrow of light."
I am super proud of him and while I did receive a pin that night as well I am happy to say I didn't need to push to hard. This is something he really wanted and he wasn't going to let anything stop him.
Posted by Freyja Colborn at 11:05 PM